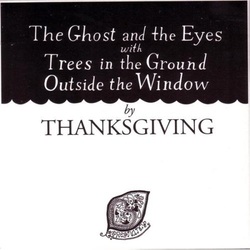 The Ghost and the Eyes and the Trees in the Ground Outside the Window, 2004
States Rights records/SLENDER MEANS SOCIETY

The Ghost And The Eyes
O O O My Love
Now I’m Dude
A Song Is "A What The" "A Whoo Why"
Wait, Start Over
There's No Invisible Halloween Costume That Isn't There
The Archers Who Moved
The Ends of Lights
Trees in the Ground, Outside the Window

The Ghost And The Eyes
The ghost and the eyes, all of a sudden,
Met at the window at sunset
And even though it was lonesome
It kinda’ felt sorta’ like home


O O O My Love
O, O, O my love, let’s go back to our eyes
For this day, we’ll be gone, before long
And I want to breathe outside
Where it smells like my whole life
While we walk home tonight

Now I’m Dude
Now I’m dead, I am soaring
I’m in the air, up in between the leaves
And in the room where I slept
There’s a window by the bed
And there are trees
In the ground
Outside it


A Song Is "A What The" "A Whoo Why"
A song is like a mask that’s tied
Around the world that’s around you
But the world, unrecognized
Unnamed, unknown, is mostly true

And this is the one where my hands are in water
From a bucket, from a well
And passing over the sky above you
There are trees and glass to see it through
And this is only a moment further than this one more
And this one, too


Wait, Start Over
We jump the fence, start again
My new clothes the sun warms
The slow clock climbs over the freeways
The train track seams
And the world turned to move the room
Where things between (nothing) and moons are filled

To be invisible, like wind and ghosts
Where air is clear
That might light be here
And left the room
I walked around the house
And let the water run
From the hose on the windows


There's No Invisible Halloween Costume That Isn't There
Baby doll, do you want to live
In a long lost meadow far away
With willow trees that weep all around
The tall grass in which you’d lay

Do you want to be golden, seeing flowers
With long green tails holding crowns
And smell them sleepy while your legs melt
Softly like the sun swells out?

And stomp out the fires that lash you, huddled
Sleeping on stilts that lean like a bottle
And your house is crooked and withering painfully
Creaking its beams while the wind whistles through them
And your time is passing so fast, and yet slowly
You get what you want and are lonely holding

And then it is raining, ‘cause Halloween’s coming
So close you can smell it right against your face
And you’re walking quickly through the wet stone city
So loud all around you because you are late

Now do you see me moving
From the cold eyes in the walls
Where our father’s fathers (grandma’s grandmas) stacked the rocks
To make the rooms that make us soft?

As the world moved
As they knew what it was
All bowing and arose
Their eyes turned to a river,
Saw a rainbow

I’m riding water to the island
Where I’ll stand, I’ll be kept alone


Trees in the Ground, Outside the Window
One night there was a big storm
With rain and wind, thunder and lightning
And it was just a joy to sit
And hear a roar and see a flash

And the sun came up and filled the sky with roses
Burned off the fog, the air was clear and sweet
And we avoided all the world’s sharp things
By using the soft, pink pedals as shields